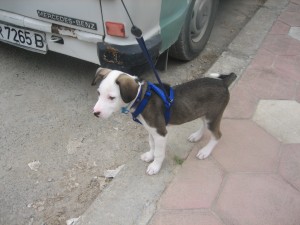 This is the view from our balcony … On Saturday, Abby agreed to watch the dog while I went to the Hash. The Hash was on a beach south of Durres, Albania’s main port. The trip was a funny thing: there’s a major beach road that runs south through Durres, from which you can see the ocean to the right between all the buildings that have sprung up in the last seven years; then the road turns inward, or perhaps the coast turns outward, and you lose sight of the water, but it still feels like you’re on a beachfront road. A few kilometers later, we made a right turn toward the Plazhi Gjeneralit (the public beach) and five minutes later, instead of hitting the beach, we were heading up. And further up. And further up still, past farmers’ houses and abandoned sheds. At this point, I began taking photos with the camera in my new telephone (00355 68 407 0129, in case you need to know).

The hills were pretty dramatic. Still, all the going up had us confused. But then the ocean appeared, and we started going down. We passed an incongruous deserted military base and then we came out upon a wide beach with a brilliant blue ocean under a blazing sun. We all convened, and started the Hash by immediately turning around and running back up the hill we’d just bounced down in the 4×4.

The trail was tough, and especially so because the first turn was so poorly marked that about 8 of us – including one of the hares (the people who mark the trail the day before) got lost. We spent about 20 minutes running up higher than we had to, dashing back and forth across the hilltops before we picked up the trail further down. From there, the markings led us to the Beer Stop. Unfortunately, I hadn’t carried my phone with me on the run, so I’ll have to describe it for you: we came out of the dunes and saw a beach with an outcropping of big rocks. At the water’s edge atop a set of rocks concrete hut with a crudely tented concrete platform perched over the water; the platform was set with plastic chairs and tables. We scrambled onto the platform up and began ordering beers, and toasted each other as the waves broke over our feet. Blue sky above, sapphire sea to our backs, beach to the left and right, and rocky, scrub-covered hills ahead. As we watched, a herd of cows came from around a bend on the beach and began disrupting one family’s picnic. (As the old cartoon goes, “That’s not something you see every day, Chauncy.” “What’s that, Edgar?” “A herd of cows, interrupting a picnic.” “Oh, I don’t know, Edgar, they have some pretty big ants in Albania.”)

After the beer break, we continued running and then hit a cliff wall that we had to traverse in order to reach the end. It would have been a little better to have done the cliff before the beer, but that wasn’t an option. From there, we ran to the finish, and dove into the bath-tub warm water. Afterward, a few of us had lunch at the beachside restaurant while the others went back into town. I was with two administrators from the International School who’ve had long and varied careers – Norway, Dubai, and other places that now I don’t recall. One of the guys and I shared plates of fresh grilled fish – levrek and koc. If any of you come to visit (we have room for four – and after January, the door is open!), we’ll have to take you to Durres for grilled koc. The flavor is brilliant, and paired with a fine beer (a Tirana 2007, for example) and some fresh bread, there is no finer meal.

On Sunday, we took Cooper over to Alwyn and Viki’s for a playdate. Viki is a vice-consul; her husband Alwyn (who writes http://www.ourmanintirana.org/) is passionate about dogs. They have three street dogs that they keep in their yard; we figured that Cooper needs to socialize with other dogs. Unfortunately, I cannot post the video of them playing, but here are the photos of our dog: