Prang Sam Yod is a Khmer-era temple. It was built approximately 800 years ago by King Jayavarman VII, who built many of the structures at Angkor Wat.

Today, the temple sits in the middle of a traffic circle, and it is best known for the monkeys. Don’t trip over them on your way to the site.

In August, I went with a friend to Ang Thong, a province about 100 km north of Bangkok. The province is known for its temples.

Most notable is Wat Muang, site of the largest sitting Buddha figure in Thailand—84 meters tall, sitting atop an eight-meter high pedestal.

To give another sense of perspective: the statue is enormous.

There is a mirrored sanctuary hall with wax figures of the deceased chief monk and his acolytes.

Wat Muang also has a Hell garden—a warning to immoral visitors of what will happen to them in the afterlife.

The kids don’t seem too worried; they must be very good children.

Also—you can see some cheerful recreations of earthly and heavenly battles.

Our last day, we had a short ride to a ferry which took us to Hoi An, a UNESCO World Heritage Site and former trading city.

I’ll post a video of the trip soon. In the meantime, on to the next topic.

After the visit to the My Lai Massacre Museum, the visit to the Heroic Mother Statue was a more uplifting exposure to the Vietnamese experience of the war. The statue and accompanying museum opened in 2015 to mark the 40th anniversary of the end of the war. It honors Nguyen Thi Thu, whose 11 children and grandchildren all died fighting against the U.S., as well as the other “heroic mothers” of the war who fought in the war or otherwise contributed to the Vietnamese effort. 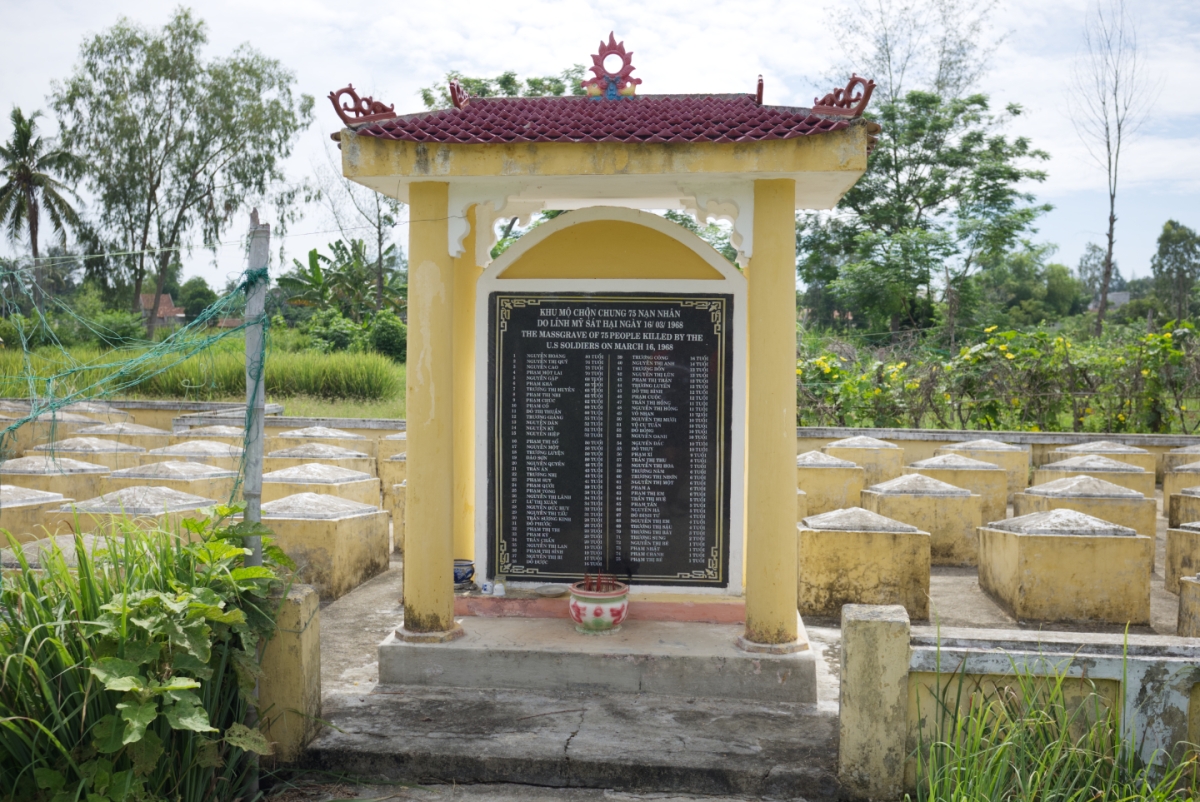 Note: Some of the photographs below are disturbing.
Leaving Tam Quan, we biked a few miles to what was in some respects the most significant stop on our tour: Son My, the district that was the site of the My Lai massacre. (Click on this link for a detailed Wikipedia history.) On March 16, 1968, soldiers from two U.S. Army battalions attacked a number of hamlets in pursuit of Viet Cong (VC) guerrillas with orders. Colonel Oran Henderson of the 11th Brigade told his officers to “go in there aggressively, close with the enemy and wipe them out for good.”  The orders, as transmitted downward, resulted in the command to consider anyone in the villages as VC members or sympathizers. Over the course of the next few hours, soldiers destroyed everything in the villages—homes, livestock, food supplies; killed somewhere between 347 and 504 civilians, including women, children and the elderly; and conducted an unknown number of sexual assaults.

The following are photographs from the memorial museum and the surrounding area.

Some actions, some victims, and some survivors:

Outside the museum and in nearby fields, there are mass graves, as well as the foundations some of the houses that the soldiers destroyed.