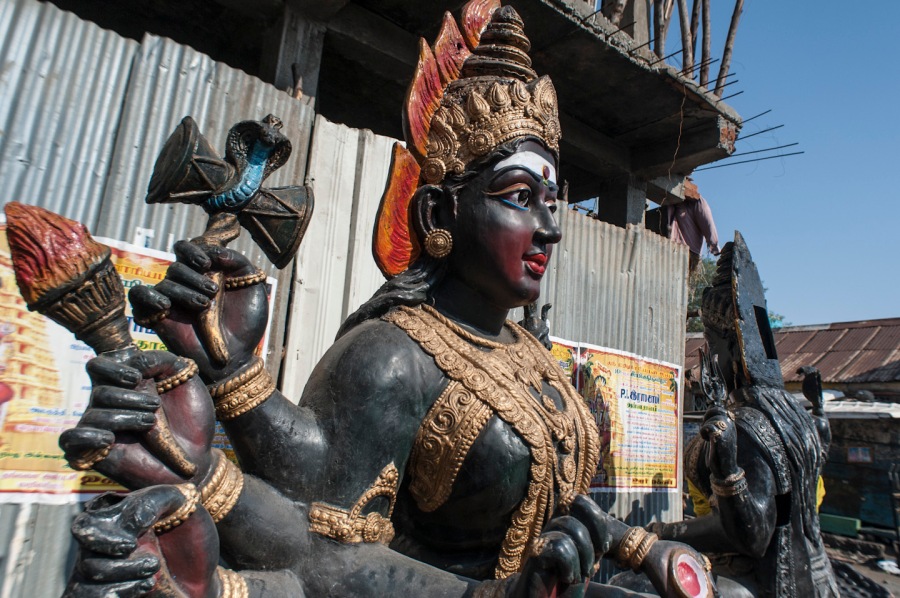 the portraits i posted in the previous few posts began from this image … i was walking through one of the many metal-working districts in chennai last week when i came across these figures. the guys working on them told me they were for a festival down the street, so i walked into the neighborhood and learned that their mariamman festival was starting the next day.

the mariamman festival started with the setting-up of the stage and the idols, followed by a neighborhood meal; afterward, the temple priest held ceremony in which, traditionally, he asks mariamman if she is ready for the festival, if everything has been prepared correctly. there were a number of women dancing in front of the temple in an ecstatic trance, and one of them took on the role of mariamman and gave what i assume was the appropriate answer.

i came back on saturday, but not much was going on: kids were playing on the stage, and the girls had had their hands painted with henna. i was tapped to take more portraits, and a few people told me that not much would be happening that afternoon, so i spent about half an hour there and promised to come back.

sunday began with a procession. there was a set of drummers and, behind them, a string of women carrying burning pots. they brought these to the temple to offer prayers to mariamman. the pots smoked a lot, which may have been the point, since the prayers go up to the gods with the smoke, but they didn’t look comfortable to hold, and my eyes stung after just a few minutes of walking with them. after the offerings, the games started, specifically a game that is very much like a piñata, except that the players swing at a clay pot filled with water. the guys running the game invited me to take a swing at it, but i declined. eventually, the pot shattered, the woman who hit it got showered with water and won a plaque, and then the band played and everyone danced.

those of you who are squeamish about extreme body piercing probably should stop here.

at 3.00 that afternoon, people began preparing for the main event – the religious procession that would wind through the surrounding neighborhoods. the worshippers of mariamman show their devotion by piercing their bodies with needles, vel (spears), and in some cases, hooks. this is not dissimilar to what i’ve heard about in other religious celebrations, such as ashoura or semana santa, and i’d even seen one of these types of processions last year; but i’d never seen how the spears get from a, through b, to c. this time, the people made sure i would.

i’d gone home for a few hours after the dance, so when i returned i was surprised to come upon a man wearing a shirt of apples. “interesting garb,” i thought, but on closer inspection i realized the fruit had been literally sewn into his skin with thread; then i saw men and children all around with fruit dangling from their chests, backs or ears. the adults (and the older kids, some of whose, whose faces had been painted for the occasion) do it for devotion, but when the little ones are sewn with the fruit, it may be because the parents were making this offering in exchange for an answered prayer when the child was sick, or something of the sort. the babies didn’t take to the needles … philosophically, let’s say.

soon it was time for the men and women to line up in front of the temple for their vels. the priest made some incantations for each one, and a guy whom i can only assume is the local expert rubbed their cheeks and “sterilized” the vels with a powder made from burned cow dung, and then …

this went on for a while. meanwhile, on the main street, other worshippers were getting ready for the procession in their own ways.

all of this was amazing, and i was grateful to the community for allowing me nearly free rein with my camera; and as they say at passover, “dayenu“. nonetheless, there was only last tableau of the procession that pretty damn remarkable. i saw some guys on a truck and wasn’t quite sure of what i was looking at, until suddenly i was:

as i said, people like to have their pictures taken.

i took these photos at a local festival for the goddess mariamman, the mother goddess. more on this shortly. 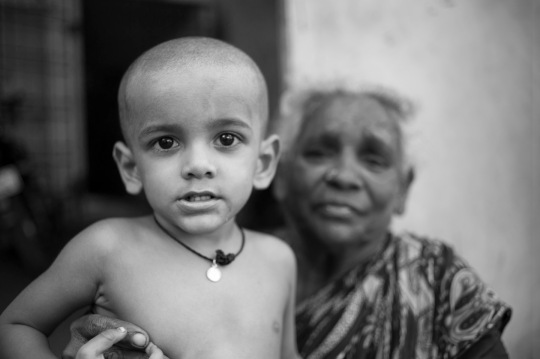 over labor day, we went to ooty, a hill station in the nilgiri hills of tamil nadu. james and i drove the 12+ hours each way so we could bring the dog, while our wives flew to meet us. the drive was typical for tamil nadu – fantastically smooth national highways punctuated by the occasional lorry traveling toward you head-on; state highways that wind through villages, on which you will get stuck behind two buses with no room to pass; and mountain roads that are full of switchbacks, on which you will get stuck behind two gravel trucks with no room to pass. (see my post about yercaud.) generally, if you’re traveling in india and google maps say a drive will take 6 hours, it’s wise to add another 3 hours.

ooty historically was the place that the british, and the elite more generally, spent their summers when madras (as it was known at the time) was too hot. the colonial influence is still felt through the architecture. see, for example, lymond house, the inn we chose for our stay because they take dogs.* the people at lymond house were very nice, even when cooper jumped up on the duvet with his muddy paws and later barked at them for walking around what was now his house.

the hotels and architecture are not the only reasons to visit ooty. one of the main attractions is tea: the british introduced tea to the hills in 1838, and nilgiri tea is an ingredient in many of the international blends today. there are plantations all over the area, and we were fortunate enough to meet one of the owners at dinner. he invited us to his home for tea the next day, and then to the factory to see how the leaves are processed. we learned that the tea is harvested throughout the year; pickers take just a few fresh leaves off each bush every ten days, leaving the older dark leaves where they are. the fresh leaves are poured into troughs with mesh bottoms, to allow hot air to flow through; the dried leaves are then poured through holes in the floor to go through a series of shredding machines. the shredding allows the leaves to be coated with the flavors from the leaves. the leaves are then oxidized (to turn the tea black), heated and ground to one of three sizes before being packaged and shipped out to the blenders. in comparison, green tea is turned in a rotary machine to compress and roll the leaves; green tea leaves are neither shredded nor oxidized before they are packaged.

*it’s actually very difficult to travel with a dog in india, since most hotels won’t accept them, restaurants won’t let them in, and dogs aren’t allowed in parks. the guard at the botanical park told us dogs weren’t permitted in as a street dog trotted across the lawn behind him; when i met with the manager and pointed that out, he explained that if a dog is under control on a leash, then he has to keep it out, since it would bother the other 8,000 tourists who visit the park each day; whereas if the dog is a stray and not under control, there’s nothing he can do it stop it coming in (regardless of how people feel about it), so he ignores those. the tenacity with which he clung to this twisted logic was nothing short of breath-taking.

as a follow up to the previous post, here is a photo james took of me with the boy from the railway platform: 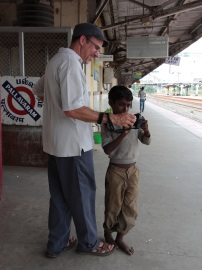 a few random shots from james’ and my last photo walk, in pallavaram (near the airport): first, the portraits.

as we crossed the railroad tracks at pallavaram and made our way deep into the village, a few drunk guys accosted us and asked for photos. (the second guy was a tea wallah, not one of the drunk guys.) the kid was someone we met on the train platform. he was fascinated by my olympus om-d, particularly the feature that allows you to scroll through the photos by swiping your finger across the screen. finally, we found a bunch of schoolchildren who invited us into their school to take pictures.

next, the stop at the construction site:

james looked at his photo and said something to the effect of, “we’re pretty conspicuous, aren’t we.” yes, we are.  this wasn’t exactly the sebastião salgado moment i was looking for.