The Thais certainly appear to be a people who like religious figures. After visiting the Buffalo Head Temple, we went to Wang Saen Suk Hell Garden. The path in is lined with scenes from Buddhist mythology. All very pleasant.

Then you see this: 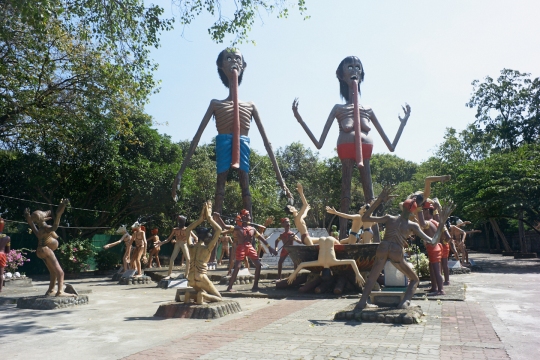 Welcome to Wang Saen Suk Hell Garden, a park dedicated to showing people what will happen to them in Buddhist hell. The two towering figures above are the ghosts of Nai Ngean, a man who violated the Five Precepts of Buddhism during his life, and Nang Thong, a woman who engaged in immoral sexual conduct. They are surrounded by a circle of figures with animal heads, each representing the punishment for a specific kind of sin, and a representation of sinners being boiled in a cauldron.

That is just the beginning. As you go through the park, you see the punishments meted out to people who violated each of the Five Precepts of Buddhism, as well as those who committed other types of sins. First, if you violate the precept of refraining from “killing and the mind without loving-kindness,” this happens to you.

If you violate the second precept by “stealing, cheating or destroying others’ property,” you can expect to be sawed in half, speared, and bashed in the head with an iron club.

Violating the third precept by “infringing the sexual intercourse, being paramour with the others’ wives or husbands” gets you a good stabbing and being torn apart by wild dogs.

While we’re on that topic, let’s look at some other punishments for sexual misconduct:

On to violations of the fourth precept, by telling lies and deceiving others. This is much more of the standard punishment: being stabbed, having your eyes and tongue torn out.

Finally, those who violate the fifth precept by drinking intoxicants and “losing control of their mindfulness” … actually, it looks like they just have to get drunk and stay drunk. Given what’s going on around them, I’m not so sure that’s the worst punishment.

It all makes for a fun afternoon.