we took a long hike on the second day we were in tinos, using a guide that abby found on the web. the guide incorporated the marked hiking paths on the island, but also included byways that the author had found on his own excursions.

tinos is dotted with dovecotes, buildings that shelter pigeons. the venetians introduced pigeon-breeding to tinos and other cycladic islands, for the meat. especially during the second world war, pigeon meat was very popular. the majority of them standing today are from the 18th and 19th centuries. some of them are well maintained while others have been left to fall to ruin. inside, they aren’t very interesting and, unsurprisingly, they smell like bird poo.

we went through some dramatic scenery, but we also went through some hellacious weeds. the hillsides were filled with thorny bushes and undergrowth, and at one point, our guide mistranslated the word “right” as “left,” so we ended up plowing through knee-high scrub, taking much of it home with us in our shoes and socks.

it was a hot day, and – with the hills – the hike was brutal, but ultimately we were treated to a pretty spectacular view: 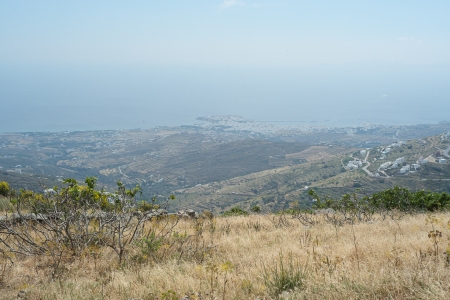 next: onward to skopelos.