going for the gold day 3, including live at the apollo (part 5)

i woke up in parikia, had an entirely adequate breakfast, and set off on the bike again to look for a local church and some caves. the church was easy to find – it was visible from the main town – but since the road didn’t actually go along the coast, i had an early dose of hill riding/pushing to do. again, the area was pretty empty because tourist season hasn’t started yet.

my first stop was agios fokas, a small church located 6 km from town. the church itself isn’t particularly notable – it’s a typical chapel – but nearby is what appears to be an abandoned naval station of some kind, and a memorial marker for the passenger ferry ms express samina, which struck a reef on september 26, 2000, killing 81 passengers. the story (which you can read by clicking on the link) is pretty awful.

from there, it was off to find the archilochus caves, located (according to the guidebook) only 10 minutes away. there were no signs, but i followed the road back, figuring they were just over the hill. you can guess how that turned out. 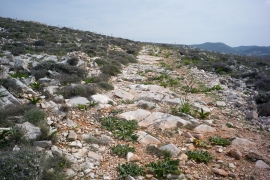 after far too much time searching for the caves, i decided to move onto the temple of delian apollo, which was up a different series of hills.

the temple of delian apollo was built in the 5th century bc. “delian” refers to delos, the island birthplace of the god apollo. the site location was well marked, but you can tell how important a site is by the amount of security around it, and there was nothing more to protect the temple ruins than a rusty open gate. with little exception, it appeared that any stone that had any type of carving on it had been taken down to the archaeological museum.

i returned to parikia to begin my exploration of the town. one of the main attractions is the ekatontapiliani church, built in the 4th century, possibly by constantine the great, the roman emperor for whom constantinople was named. it’s very impressive inside, and perhaps as a result, the building comes with a sinister legend:

according to the popular legend, during the reign of justinian, ekatontapiliani was build by the former assistant of the chief craftsman of agia sofia, ignace. when the pupil finished the temple, he invited the master to admire his work. the chief craftsman felt envy and was afraid that his pupil would overshadow his reputation. pretending that he wanted to show him an architectural fault, he took his pupil on the roof of the church. from there, the chief craftsman pushed his pupil with intent to kill him. the pupil however held on to the teacher and finally they both fell and were killed in front of the church.

for the rest of the day, i strolled the narrow backstreets of parikia, admiring the shapes i found in various doorways, alleys and staircases. and cats.