street photography in chengdu, sort of

as i was running around the streets, taking photos, i was struck forcefully by how many people were using their phones to take photos. more generally, i noticed how many younger people in particular had their eyes fixed on their screens, even when they were in groups. at the risk of sounding like an old fogey (and a hypocrite), this struck me as a serious problem. if steve jobs had wanted to enslave the population by turning them into appendages of technological devices, he succeeded.

as something refreshingly not telephonic, here is a photo of two girls and their dad playing with a parakeet at the song xian qiao antique market: 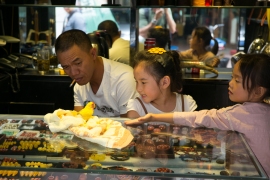