abby and i spent the final days of 2013 in savannah, georgia, a city that i’d wanted to visit since reading midnight in the garden of good and evil nearly 20 years earlier. savannah is a beautiful city, with a truly beautiful historic district full of mid-19th century houses. and naturally, because it is such a charismatic city, it is a haunted one as well – the most haunted city in the u.s., it’s said.

we took a highly entertaining ghost tour on our second night there, which i recommend for anyone who visits the city, and i went back the next day to take photos of the most interesting (to me) houses on the route. (i could have taken the camera with me that night, but the lighting was poor, and i don’t like using flash.) here are some highlights.

first is the mercer house, located at 429 bull street, between wayne and gordon streets, on monterey square. mercer house was made famous by midnight in the garden of good and evil as the house of jim williams, who – after four trials – was acquitted of murdering his handyman/lover danny hansford on may 2, 1981. williams alleged that he shot hansford in self-defense. williams himself died on january 14, 1990 of pneumonia and heart failure (perhaps), allegedly on the exact spot where he shot hansford. or he died outside the room; it depends on whom you believe, as these things usually do.

even before this notoriety, however, the house was associated with tragedy, first, when the house’s owner in 1919 fell mysteriously from the balcony; and then in 1969, when a boy who was hunting pigeons on the roof with his friends fell and impaled himself on the wrought iron fence below. according to the story, he hit the fence so hard that the tip broke off. (click on the photo to enlarge it.) one of the witnesses, a friend of his, said that it looked as though the boy had been pushed backward off the roof by an unseen force.

a few of us looked at the overhang and the position of the fence and said that there was no way that the kid could have hit his head, especially if there was any backward momentum associated with the fall. we hypothesized that his friends may have been holding him over the edge by his feet when they accidentally dropped him. if that happened, it certainly would have been easy to blame ghosts, because …

… just down the street in calhoun square are two more haunted houses. first is the espy house, on abercorn between wayne and taylor. in 1934, wesley espy, the son of the home’s owner, was chasing after a gangster’s girlfriend. after being warned several times to leave her alone, the gangsters delivered a more urgent warning to the boy – they kidnapped him, cut off his testicles, put them into the breast pocket of his jacket, and dumped him on the house’s porch. the boy’s father, a federal judge who may have been a bootlegger himself, brought in a surgeon the save the boy, but he died – according to the newspapers, from a fall from the porch. his ghost haunts the balcony of his room. there also is the ghost of a twelve-year-old girl who broke her neck when the dumbwaiter she was playing in fell from the second floor to the basement. after standing vacant for many years, the house is finally under renovation as offices. 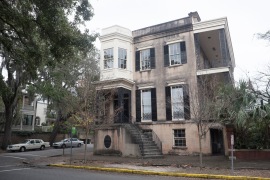 the same cannot be said of the wilson house, across the square at 432 abercorn street, between gordon and wayne, which – despite its prime location on calhoun square in savannah’s historic district – has been vacant for years. 432 abercorn street may be the most haunted house in savannah. the most chilling story associated with the house – which, when our host nicodemus told us as we stood in the dark outside the building, sent shivers down my spine –  is that general benjamin j. wilson, for whom the house was built, became irrationally angry at his nine-year-old daughter for playing with the children who attended the school for poor children across the square. as punishment, he forced her to sit in the window (some say he tied her to a chair) and watch, but not play, for two days. the sun pouring through the window was blazing hot, and the girl died of dehydration and heatstroke. in despair, general wilson killed himself a few days later.  there’s also a story that three young girls were murdered in the house sometime in the 1960s, their organs removed and the bodies laid out head-to-foot in a triangle … and finally, sometime in the 1970s, the house’s then-owner rented it to students from the savannah college of art and design in exchange for them doing renovation work. one by one, the students left, after experiencing paranormal events – one was pushed down a flight of stairs, for example, by an unseen force. if one goes inside, our guide said, you can see where the work tools were thrown down mid-job and the work was left unfinished after the students left.

a few people have spent a lot of effort debunking the stories as pure myth, going so far as to hunt up the wilsons in census records, but what has been proven true is that the house was built on a slave burial ground – the utility company occasionally digs up bones in the square – and strange things have been documented there: people experiencing negative energies (okay, questionably verifiable), and cameras either malfunctioning or capturing mysterious images, like these ones (click here or here.) the owner has since drawn the curtains, so my own night-time photo – i did take one with my cellphone – didn’t show much … 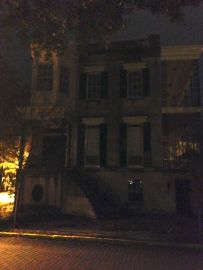 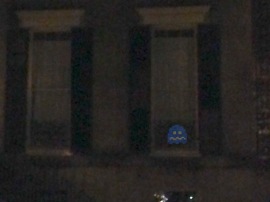 actually, i was hoping to find something mysterious on my phone, so i was disappointed. however, i did realize one interesting “fact:” as has been documented many times (for example, here), there appears to be a surprising number of murderers and serial killers with the middle name “wayne” – most notoriously, john wayne gacy, the killer clown; elmer wayne henley, who helped kill 27 young men; and more than one hundred other [blank] wayne [blank]s. the mercer house, the espy house and the wilson house all sit on city blocks (monterey and calhoun squares) where the middle street transversing the block is called “wayne” – gordon street-wayne street-taylor street.