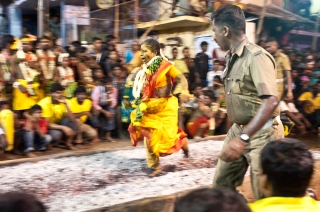 for the end of the draupadi amman temple festival, devotees walked across hot coals to show their devotion to their god.

i arrived with ample time to spare and after i took my shoes off, the attendants let me into the restricted area where they were building the fire – being a foreigner with a camera can be really helpful sometimes. the heat was already fairly intense, and the men (all the workers were men) kept dousing one another with water so they wouldn’t overheat as they stoked the fire with wood and then raked out the coals.

as it got closer to 7 pm, more people began entering the fire area, and the crowd beyond the fence was filling in tight as well, so the atmosphere became more and more crazed. at 8, they brought in the statue of the god draupadi amman, and everyone went wild. i was jammed up against it and could hardly move. then the devotees began coming in to walk across the coals. there were men and women, young and old. some of them walked across stoically, even making a show of carrying their children over the coals. others ran, and in a few unfortunate cases, the devotee went into shock and convulsions as he completed the journey, or nearly fell into the coals.  (in each case, there were attendants and members of the fire brigade on hand to grab the person and pull him or her to safety.)

i was standing at the end of the bed of coals barefoot, and a few times i stepped on embers that had been kicked off the bed. how someone could walk on 30 feet of that, i have no idea. as it was, i could barely get my shots off before i’d have to move as the devotee came flying off the path. after about 40 minutes of being jostled and shoved and standing next to the intense heat, i had to step back into the crowd and sit down.