Today involved touring the city and eating. Food in Tirana is cheap – last night’s dinner was $9 for two pizzas and $12 for a bottle of decent wine. This morning we started with espresso, which Albania has in abundance. Then we met our teacher for a walk around some of the sights. A few notable sights included the Polytechnic University (to the right) and the Academy of Arts, which look forlorn and run-down. These sit in Mother Teresa Square, and despite the reverence that Albanians have for Mother Teresa (who was Albanian), the only marker in the square is “Nena Teresa” spelled by the bushes in front of the Polytechnic. Similarly, there is no marker in Woodrow Wilson Square (the traffic circle in front of the blue building). Albania is the most pro-American country in Europe because Wilson prevented Albania from being carved up between Serbia and Greece in 1913, and he is a national hero of sorts. Yet there isn’t even a sign. In fact, there are almost no street signs at all in Tirana. 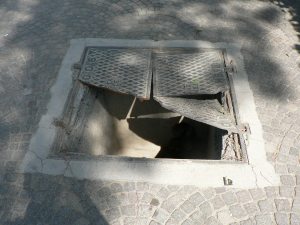 Another interesting feature of navigating Tirana streets is that you have to watch out for missing utility hole covers in the sidewalks and roadways. The Roma steal these and sell them for scrap metal. The holes can snap an axle (or ankle).

A story about the Academy of Arts and Albanian politics. The Academy used to have a privately-run café attached to it. The café was operated by a supported of the Socialist Party. When the Democratic Party came into power, they ordered the café to be torn down. This is emblematic of the past 16 years of Albanian politics. The SP and DP have alternated control of the government – the SP, led by Fatos Nano initially and now by Edi Rama, and the DP, led by Sali Berisha. Both Nano and Berisha were former Albanian Party of Labor (Communist) Party members, and they are paired in the public mind as two sides of a not particularly effective coin. National leadership often seems to use “kazmën në vend të plugut” – a pickax instead of a plough.

So back to food: we lunched at King House, which is owned by our teacher’s husband’s business partner. Every Friday night, it’s ex-pat central. (More on this later.) We had some amazing Albanian dishes including a green pepper/cheese/tomato casserole and meatballs baked with tomatoes and onions, and then finished off the meal with raki, which is an Albanian grappa. It’s killer stuff – we went for a nap after the meal, and when I woke up, I had no idea who the woman in bed with me was but I knew that Abby was around there somewhere …

After we reassembled our heads, we visited the Regency Casino. Tirana has legalized gambling. Most of the gambling houses are small clubs with roulette tables and video poker or slots, and with bouncers who look like they could chew through a Plymouth. However, the Regency is a larger (although still small by American standards) casino with blackjack, three-card poker, and good lighting – very much like a casino you’d find in London. We won $150 at blackjack, which just about covered our meals for the week. On the way back to the King House for another raki, I began to take serious note of the fashions. Some writers have mocked Albania’s youth for their lack of fashion sense, and there is some truth to the matter: the girls’ blouse cloth is a little too shiny, or the kids will wear anything that has an English phrase on it even if the phrase makes absolutely no sense. But there’s something very sincere about the whole look.