a few weeks ago, we went to cyprus for a few days. the south and west of the island – the part i visited, well below the green line – appears πολύ ελληνική (very greek) …

… although its history as a british colony is pretty evident as well. 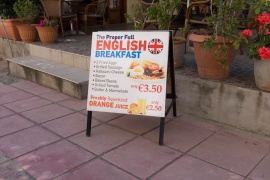 so let’s take a look around.

we’ll start at the petra to romiou, or aphrodite’s rock. this is the spot where the goddess of love, aphrodite, who was born from the sea foam, came ashore at paphos, carried in a scallop shell.  it sounds very romantic, until you read the detail in the wikipedia entry:

in the most famous version of her myth, her birth was the consequence of a castration: cronus severed uranus’ genitals and threw them behind him into the sea. the foam from his genitals gave rise to aphrodite (hence her name, meaning “foam-arisen”), while the erinyes (furies), and the meliae emerged from the drops of his blood.

i don’t remember that from my copy of d’aulaires.